No truck means No mangroves

The study group’s truck broke downdown so no outing today. That meant dividing the leaves & flowers by species and weighing them.

hose are mangrove flowers in the left fore ground and the rest are leaves of various species of trees that live in and around mangroves.

Pretty mundane until this critter dropped out of the bag of leaves: 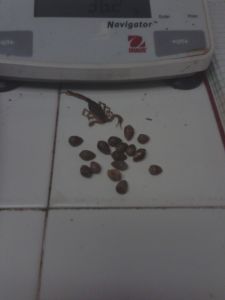 Quite inert, the little thing made the ultimate sacrifice for science. The little things in front of it are caracolito (snail) shells.

I have sort of figured what is going on there but the many questions I have are beyond the conversational level of my Spanish. As I mentioned before, I’ll be there for 5 more weeks.

I expect to know by then much, much more.