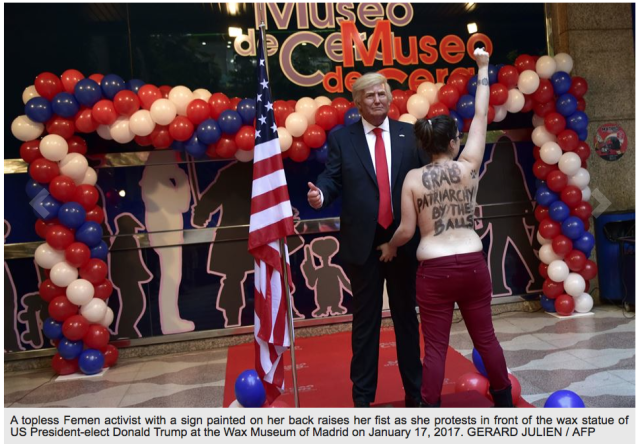 MADRID (AFP).- A topless protester managed to get so close to Donald Trump on Tuesday that she grabbed his crotch… or rather that of his effigy, the latest addition to Madrid’s Wax Museum.

Shouting “Grab patriarchy by the balls” in English and Spanish, the woman burst into the waxwork’s unveiling ceremony to the consternation of a visibly embarrassed museum employee who tried to hide her bosom with a jacket.

The woman, whose name was not revealed, belongs to the Femen activist group known for its high-profile topless protests.

She wrestled briefly with an older man who tried to push her out and was soon escorted away, although not before grabbing the crotch of the effigy of the US president-elect, who has often been criticised for misogynistic comments.

The lifelike waxwork of Trump dressed in a dark suit, red tie, giving the thumbs up and with his familiar look of utter confusion, was unveiled in central Madrid, just days before the president-elect’s inauguration on Friday.