On Boxing Day 2006 my friend Pablo Heising walked out of the Cole Café, laughing at a joke told to him by the Captain of Park Station SFPD, took a sip of his morning latté, and died.

The cop gave him CPR but Pablo was probably dead before he hit the ground. Dying while laughing with coffee on your lips? It doesn’t get much better than that. As a former US Army medic who has seen people die, I have to say, “Oh Hell YES!” I’ll take that way off this mortal coil any day. (I used to hope I’d be shot by a jealous 20 year old husband but I’m pretty sure that ship has sailed) 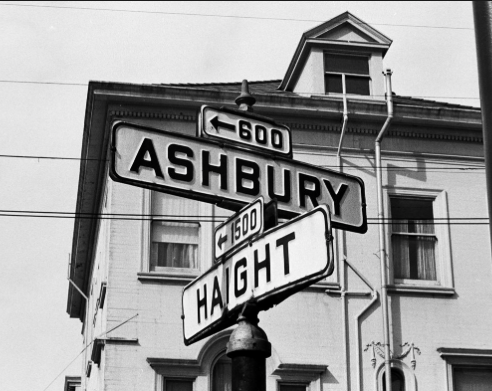 I talk about Pablo and share stories he told me on my Haight Ashbury Flower Power Walking Tour. Beginning with his efforts starting the Haight Street Fair (and 2 other SF street fairs)

Pablo ran the HASF for 29 years and was instrumental is bring the Haight back from its nadir years of the 1970s.

Today, his responsibilities are shared by a committee of hard working volunteers, including the guy with the Golden Ticket in Ken Babbs’ painting:

The above image was printed on perforated LSD blotter paper and signed/numbered editions are available at Haight Ashbury T-Shirts.

Pablo loved the Haight and San Francisco and we’re worse off without him in our community. But his spirit lives on and hopefully always will.

THIS BLOG IS ALWAYS AD-FREE I make stuff and do things.
View all posts by Stan Flouride →
This entry was posted in History, San Francisco and tagged Art, Haight Ashbury, History, Music. Bookmark the permalink.