How Journalists Covered the Rise of Mussolini and Hitler

In this brilliant essay John Broich of Case Western Reserve University details how badly the US Fourth Estate failed to appreciate the dangers of 2 of the 20th century’s worst dictators (though they weren’t much better on Stalin). In nearly every instance you can replace the names Hitler and Mussolini with Trump and the words ‘brownshirts’ and ‘blackshirts’ with ‘Tea Partiers’ and the neofascist ‘alt-right’ it would apply today.

How to report on a fascist?

How to cover the rise of a political leader who’s left a paper trail of anti-constitutionalism, racism and the encouragement of violence? Does the press take the position that its subject acts outside the norms of society? Or does it take the position that someone who wins a fair election is by definition “normal,” because his leadership reflects the will of the people?

These are the questions that confronted the U.S. press after the ascendance of fascist leaders in Italy and Germany in the 1920s and 1930s.

And I believe will be repeated in the next 4 years. 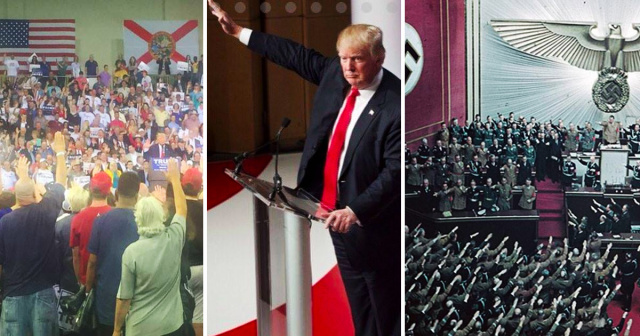 (btw- I think the frequent comparisons to his gesture and those of his followers to the Nazi salute are a bit disingenuous. A ‘real’  Hitlergruß is with fingers closed, elbow locked, and held in position for a count of one second. Some* of those in the crowd are clearly doing that and probably mean it as a Nazi honor but I doubt that most do.) 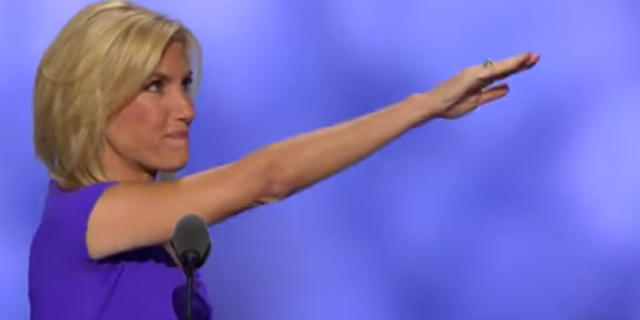 And in the comments below that essay is this comment by one Hans Thielsen that is equally brilliant and compares the events of today with those of 85 years past. I have posted it in its entirety:

This is a very pertinent article and it’s exactly what needs to be written now.

Most Americans, including the media, don’t recognize Trump as a fascist because they don’t really understand what fascism is or know much about its dark, monstrous history. But the story of fascism is as fascinating as any thriller, especially now that we are watching fascism raise its ugly head again today in America.

The 2016 election has all the earmarks of a neofascist coup d’état, not unlike the 1933 German election that led to the rise of Hitler. Only this time around, it wasn’t done by brown-shirted thugs, but by what is in effect a hostile takeover of the United States government by global Wall Street interests. But the end results are very similar.

Trump’s agenda involves a Wall St. practice called ’asset-stripping,’ where a corporation, or in this case, the U.S. government, is taken over and its assets sold off or, in this case, privatized or ‘corporatized.’

This system is also the basis of fascism.

Most people naturally think of fascists as far-right extremists, goose-stepping around with jackboots and swastikas. And Nazis are definitely fascists, but they didn’t invent fascism. Fascism was begun by Benito Mussolini, the brutal Italian dictator who founded the first fascist state in 1922.

A violent, cynical opportunist, Mussolini was kicked out the Socialist Party in 1914 and a few years later formed the brutal paramilitary gang known as the Black Shirts, which he led in his famous ‘March on Rome,’ where he ‘persuaded’ the Italian government to make him Prime Minister.

Mussolini soon became dictator by making a deal with wealthy Italian bankers & industrialists who wanted to take control of Italy. The deal was that Mussolini would rid them of opponents, labor unions, liberals, social democrats, socialists and leftists. In return, they let him swagger around, make speeches and wage highly profitable wars. But the real power always lay with the bankers and industrialists behind the scenes.

Trump has been making similar deals, only this time with shadowy global interests like Russia.

In his book, “The Doctrine Of Fascism” Mussolini defined fascism as “corporatized government;” that is, government that has been ‘privatized’ and run like a corporation, by and for the corporate owners.

Corporatizing government means public democracy is dissolved and replaced by a corporate state bureaucracy that is no longer answerable to the people, who cease to have any power or say, and simply become hapless cogs in the corporate state machine.

Trump’s new corporate state bureaucracy will be owned and run by these global billionaires and industrialists solely for their own benefit, not for the benefit of the American public.

This is not a conspiracy theory; it’s simply the kind of corporate collusion that Wall Street routinely engages in and what the GOP has advocated for years. When Republicans talk about “privatizing government and running it like a business,” this is what they mean.

Public services, agencies and public trusts that Americans have relied on for many decades will be eliminated. Vital services like Social Security, Medicare, education, consumer and environmental protections, etc., will be abolished or privatized, putting the public totally at the mercy of private profit-driven companies whose only concern is profits.

If we allow this to succeed, American democracy will be effectively done away with and Karl Rove’s stated goal of making the GOP the “permanent majority party in America” will be a reality. In effect, a one-party authoritarian state.

Once authoritarians take power. they never willingly give it up. Mussolini ruled Italy with an iron fist for 20 years and ultimately destroyed Italy, as fascism usually does where it is allowed to take hold.

In the end, it took the Allied invasion of Italy in WW2 to break Mussolini’s grip, and Italians who had long had their fill of fascism caught him, butchered him and hung him up by his heels from a meathook.

Over 400,000 Americans died in WW2 to rescue the world from the ‘corporatized’ fascist states in Germany, Italy and Japan, which were based on essentially the same kind of system now promoted by Trump & co.

If fascism is allowed to take hold here, one can only wonder:

Who will rescue America from fascism?

THIS BLOG IS ALWAYS AD-FREE I make stuff and do things.
View all posts by Stan Flouride →
This entry was posted in Uncategorized and tagged History, Politics. Bookmark the permalink.