Trump’s draft-dodger grandfather begged Germany not to deport him

Proof that the Apfel doesn’t fall from the Baum

Like his anti-immigrant grandson, Friedrich Drumpf was a draft dodging coward. In these papers he pleads with Prince Luitpold of Bavaria to not deport him. His request was denied and we’re stuck with his grandson. 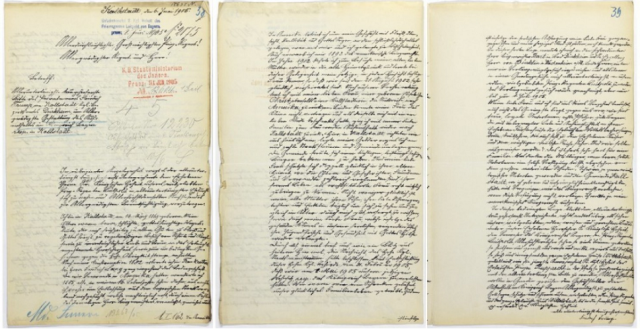 By Zach Cartwright of US Uncut

(the original Bild article is behind a pay wall)

An interesting, newly discovered piece of Trump family history puts a new spin on the President-elect’s plan to deport millions of people.

German tabloid newspaper Bild published the letter, which Trump’s grandfather Friedrich penned to Bavarian Prince Luitpold, who ruled over a segment of the United German Empire. In the letter, Friedrich Drumpf (later changed to Frederick Trump upon his arrival to the United States) begged Prince Luitpold to rescind a deportation order issued for Friedrich, due to his refusal to comply with mandatory military service.

According to the Washington Post, which analyzed and translated the letter, Friedrich wrote a “most subservient request” to the well-loved, noble, wise, and just” monarch asking him to give back the citizenship that was stripped from him in the late 1800s, after the elder Trump fled the country for the United States in order to dodge the draft in his home country.

Friedrich went West following the Gold Rush to operate several taverns and a brothel in Canada. An early twentieth century journalist wrote at the time, “I would not advise respectable women to go there to sleep as they are liable to hear that which would be repugnant to their feelings and uttered, too, by the depraved of their own sex.”

However, his wife, longing to resettle in her homeland, prompted Trump to move back to Bavaria in secret, where he and his wife lived until they were discovered by authorities. Trump then beseeched the government he fled to return his citizenship rights so he could reestablish himself in his hometown of Kallstadt.

“The American citizen and pensioner Friedrich Trump, currently residing in Kallstadt, is hereby informed that he is to depart the state of Bavaria, or face deportation,” Bavarian authorities wrote in response to Trump’s request.

Oddly, Donald Trump is following in his father’s footsteps, having taken extraneous steps to get out of military service himself. During the Vietnam War, the current chicken shit President-elect successfully deferred his draft order on four separate occasions due to his college enrollment, and was declared medically unfit to serve after he graduated, according to his draft document.

He claimed he had ‘heel bone spurs’ even though they did not keep him from playing squash, football, golf, and tennis in college and that he described in a 2016 interview as ‘a minor malady’ before lying about having a “phenomenal” draft number (18 months before the lottery began) My draft number was 17.

Frederick Trump lived out the rest of his life in the United States following his deportation until his death in Queens, New York in 1918.

As of this writing, President-elect Trump has not mentioned the cruel irony behind his plans to deport millions of immigrants in comparison to his grandfather’s plight in Bavaria.

Source: This letter shows how Trump’s grandfather begged Germany not to deport him