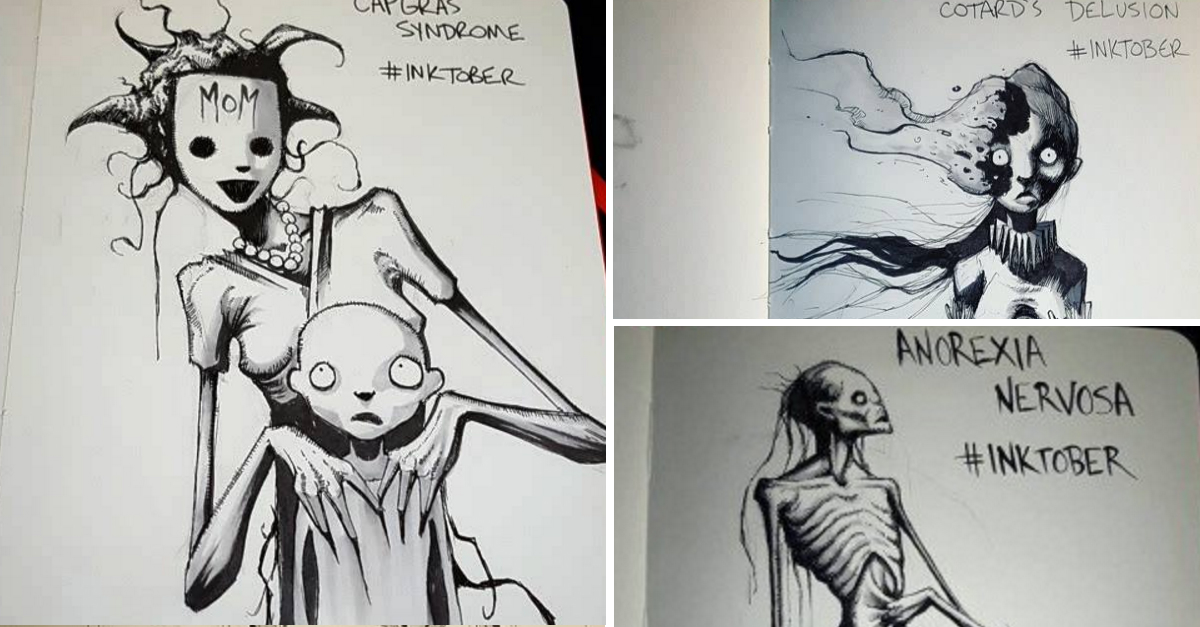 Shawn Coss describes his art style as “quite dark and free [….] skeletal or demonic in nature [….] In all of Shawn’s work there is featured a dark variant of some creature or a form born of darkness itself. Needless to say, mental illness is a perfect topic for him to address through his work. Here are some of the highlights from his drawings so far this Mental Health Awareness Month. 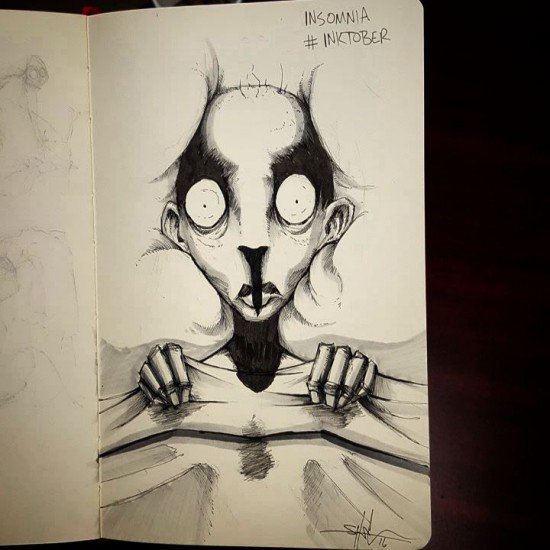 Insomnia is a short- or long-term sleep disorder in which people have trouble sleeping. Though it can occur independently, it often coincides with other problems such as stress, anxiety, bipolar disorder, OCD, or medications taken to treat a number of issues. According to the National Sleep Foundation, approximately 40 million Americans will experience insomnia in a given year. 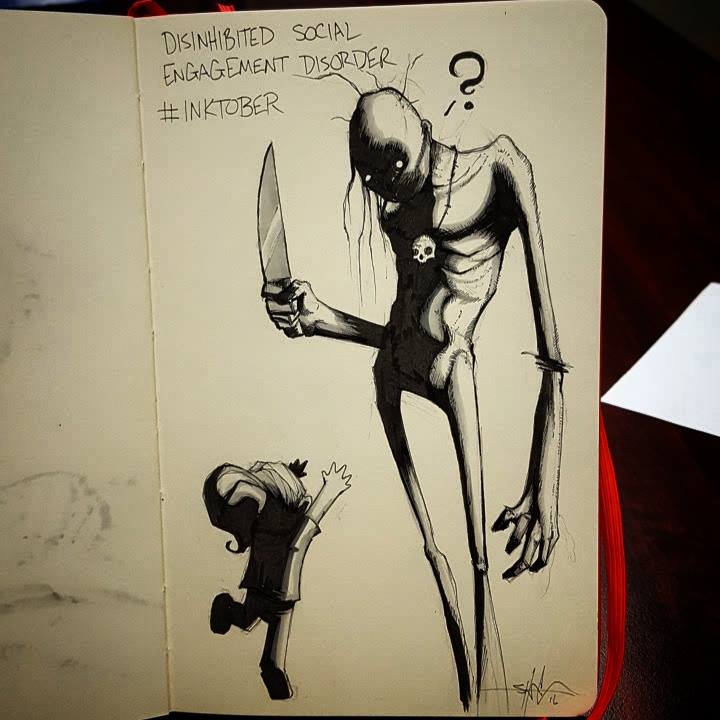 Disinhibited Social Engagement Disorder, or DSED, is an attachment disorder exclusive to children between nine months and five years of age. Often related to ADHD, DSED is a troubling pattern in which a child will actively approach and interactive with unknown adults and strangers without exhibiting the proper caution or fear. This can also mean touching, being touched by, or leaving with the unknown adults, thus making DSED a dangerous disorder if the child is not being carefully watched or taken care of. 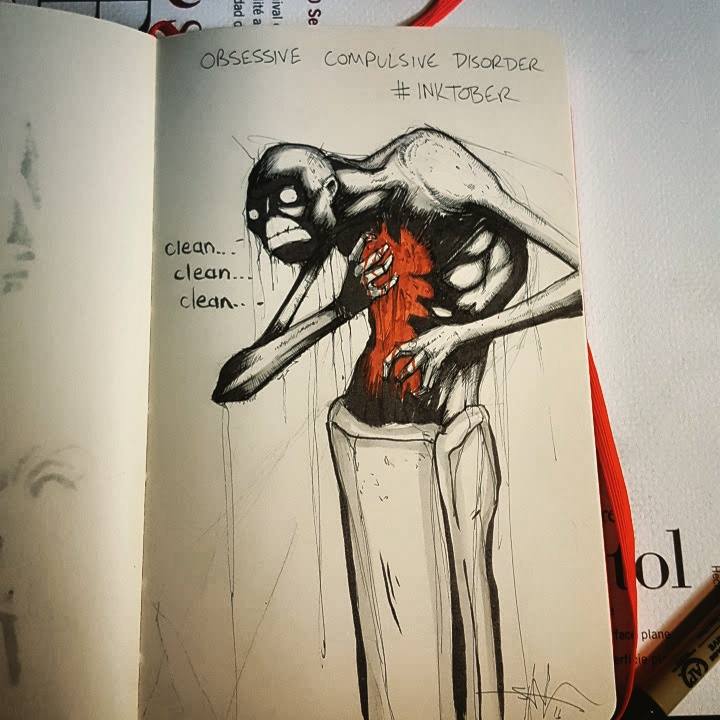 OCD is associated with an individual’s uncontrollable urge to clean or keep things neat and organized. However, obsessive-compulsive disorder can manifest itself in a variety of ways, such as through tics or certain rituals in which a person with OCD needs to repeat an action again and again. OCD is closely related to anxiety issues, and people suffering from it will often not understand that their compulsive thoughts or actions are not rational. Some 2.3% of people are expected to be affected by OCD during their lifetime, and a significant percentage of them will consider or attempt suicide.

Cotard Delusion is a rare, fascinating, and frightening disorder in which a person irrationally thinks they are dead, dying, or decomposing. In many cases, people will think that they do not fully exist or are immortal, in spite of their feelings of death.
Considered a delusion of negation, individuals suffering from Cotard Delusion will often deny that they are completely intact and will feel that parts of their body are missing. The delusion is typically related to depression, schizophrenia, and psychosis. 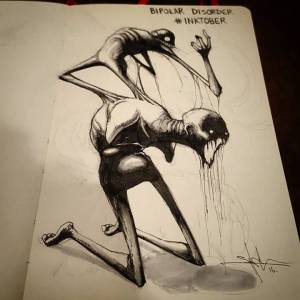 Formerly known as manic depression, bipolar disorder is best known for its varying periods of mania and depression. Both phases are equally harmful, as someone experiencing mania is more prone to make dangerous and risky decisions while depressive bouts can lead to self-harm and suicide.
Often related to insomnia and personality disorders, between 2.5 and 3% of Americans are expected to have bipolar disorder at some point in their lives. 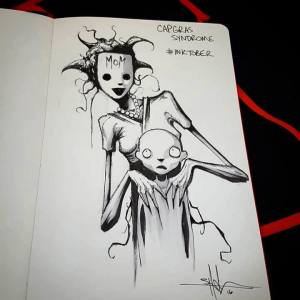 The Capgras delusion is a delusional misidentification syndrome in which somebody believes that a pet, friend, spouse, or other close family member has been replaced by an identical impostor.
Typically associated with paranoid schizophrenia, Capgras delusion can also affect those with dementia or brain injury. Historically, it was considered an exclusively female disorder. 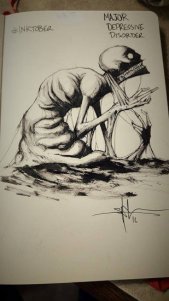 Often simply known as “depression,” major depressive disorder is classified as at least a two-week period of low mood characterized by low self-esteem, lack of energy and motivation, loss of interest in regular activities, and even pain.
A treatable illness, major depression directly affects an individual’s health, work life, and relations; nearly 16 million American adults are estimated to experience a major depressive episode in a given year. Depression can be brought on by a combination of factors including substance abuse and genetics. A significant percentage of people suffering from chronic depression will die by suicide, and a majority of people who commit suicide are found to have suffered from depression. 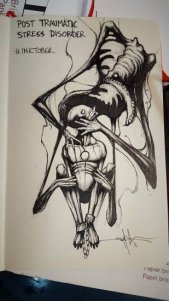 Post-traumatic stress disorder is a debilitating condition that can force people to relive traumatic events through thoughts, feelings, and dreams.
Approximately 9% of American adults are predicted to experience PTSD at some point in their life; rates are much lower in other parts of the world. People suffering from posttraumatic stress disorder are at higher risk for suicide. 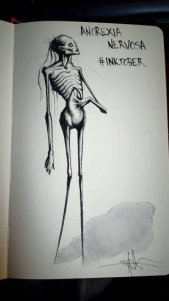 Many people still fail to recognize that anorexia, as well as eating disorders as a whole, are mental disorders. Characterized by an obsession with food restriction, weight loss, and a need to be thin, anorexia typically sets in after a major life change or highly stressful event; it is often associated with anxiety or depression.
According to 2011 statistics, some 20 million women and 10 million men in the US were estimated to suffer from a significant eating disorder, including anorexia. 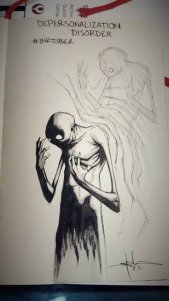 Depersonalization disorder or DPD is a derealization syndrome in which people feel disconnected from their bodies, thoughts, and feelings. Individuals typically report feeling that they are not in control of these things or that they are watching themselves from outside their own body, including in out-of-body experiences.
DPD can lead to a sense of hopelessness or inner distress that can lead to depression, anxiety, and phobias; it also expresses itself through physical symptoms. Experts have found that this dissociative disorder is related to severe traumatic events such as abuse, war, or even bad experiences with drugs. 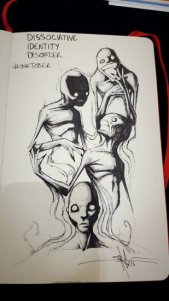 Previously known as multiple personality disorder, dissociative identity disorder is a particularly infamous mental disorder characterized by a person who has at least two distinct and dissociated personalities or states of being. Dissociative identity disorder is especially hard to diagnose as it overlaps significantly with other mental illnesses including eating disorders, anxiety, PTSD, and substance abuse.
Over time, the average number of personalities exhibited by people diagnosed with DID has grown from two or three to 16. Individuals with DID experience memory loss while switching between personality states. In one case, as many as 4,500 personalities in a single patient were recorded.

Shawn is adding more of these on FB over the next few weeks, visit his page for more. 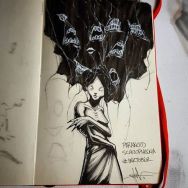 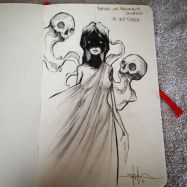 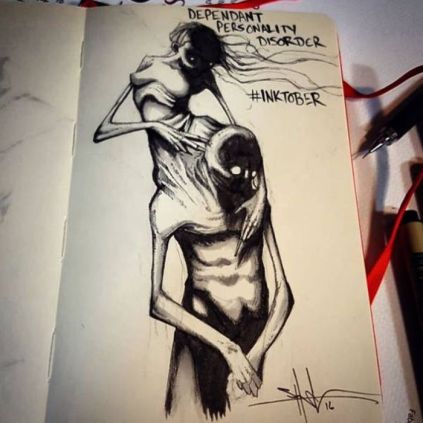 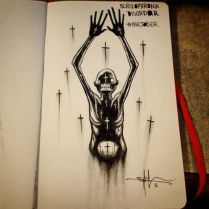 THIS BLOG IS ALWAYS AD-FREE I make stuff and do things.
View all posts by Stan Flouride →
This entry was posted in Art, Neuroscience, Science. Bookmark the permalink.