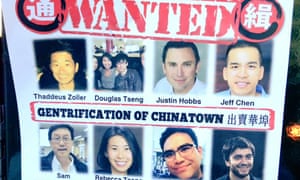 “Chinatown has generally been preserved and defended against gentrification,” said Joyce Lam of the Chinese Progressive Association, a group that organizes workers and tenants in the neighborhood.

Strict zoning laws enacted during the 1980s (after the disastrous battle over the International Hotel) have protected the stock of single-room occupancy (SRO) hotels, which serve as low cost housing for newly arrived immigrants, as well as many elderly Chinese Americans.

With their shared kitchens and bathrooms, Lam said the SROs can feel “like a village” to the multi-generation families crowded into single rooms.

But units that once changed hands solely through word of mouth or Chinese language flyers posted on the street are now popping up on Craigslist, Airbnb, and other short-term rental sites, as landlords have realized that they can earn more money renting to college graduates, single adults and white people, Lam said.

“It’s changed the fabric of the SROs,” Lam said, especially since the new residents often cannot communicate with Cantonese-speaking tenants. “It’s a different kind of feeling.”The average rent of SRO rooms has increased as well, from $610 in 2013, to $970 in 2015, according to a survey conducted by the Chinatown Community Development Center.

“It expresses a growing sentiment and a reality that the community is being exploited by speculators and unscrupulous players in the housing market,” said city supervisor Aaron Peskin, who represents the district that includes Chinatown.

“There’s no question that there are an increasing amount of illegal short-term rentals throughout the city and in Chinatown.”