Crouched Rabbit of Granite. Found in a Kyoto Garden, Japan, Circa 1850.

The 2017 San Francisco Tribal & Textile Art Show opens at Fort Mason Center on February 9 with a wondrous assortment of art from a variety of indigenous sources.

Says John Strusinski, who founded Los Angeles-based Primary Source 28 year ago, “The Tribal & Textile Art Show is a must-attend destination for top collectors, museum curators, scholars and design aficionados who seek top-notch material. They know from experience what my gallery has to offer, and this year we’re especially delighted to showcase one-of-kind treasures that the fair-goers are not likely to forget.”

First appearing in the Americas in the early 17th century after their introduction from Japan and China, the folding screens of New Spain, or biombos, would come to embellish the homes and palaces of the elite. In their various permutations, they reflect the changing tastes and fashions of a world increasingly connected through global economic exchange and the politics of the colonial period. The present screen depicts various couples set in the lush grounds of a castle with a hunting scene in the background. In the centre, a woman stands close to a peacock, perhaps symbolizing marriage, who holds a rose in her hands and turns towards a gentleman on a horse. To their right, another couple are dressed as pilgrims of the Camino de Santiago de Compostela as evident by the scallop shells stitched on their clothes, possibly as a memoir of their pilgrimage to the Galician city. A similar biombo, depicting a scene of early 18th century daily life in Colonial Mexico is at the Denver Art Museum. Provenance: From the Collection of Duque de Sessa’s family Gavito y Jauregui, Barcelona in 18th century. 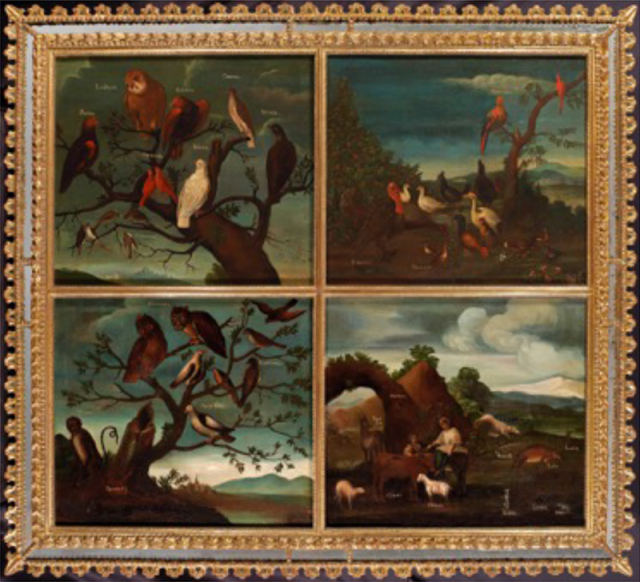 “This set of four paintings depicting the fauna of Mexico were painted in the second half of the eighteenth century, by Buenaventura José Guiol who is also known to have painted another set of birds which are now displayed in the Denver art museum and two sets of casta paintings. (…) Buenaventura José Guiol depicted these landscapes elaborately and heavy with colour. The skies are ripe with rain and movement, promising nourishment for the already fertile and abundant vegetation. The categorization of birds and other animals dominate these landscapes. Many of these species, which were native to the landscape of the New World would have been previously unseen by European audiences…” 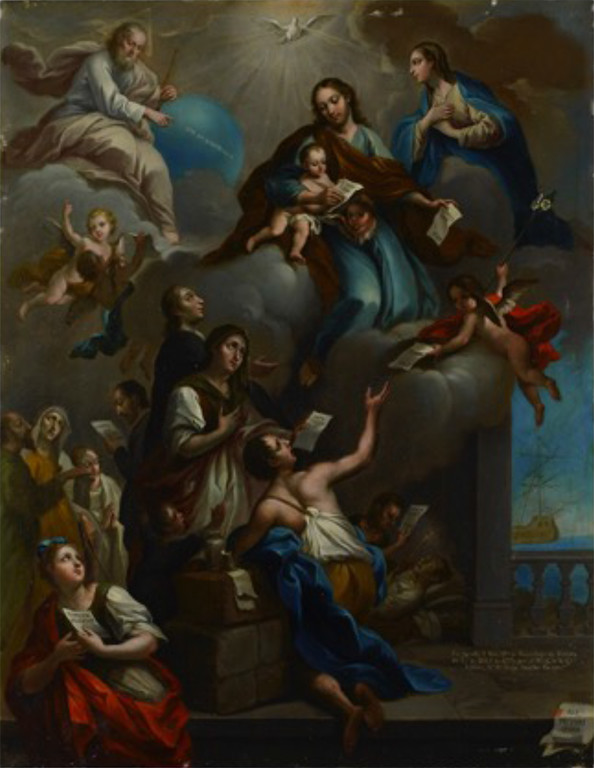  The Dream of Pharaoh and Joseph’s rise to Viceroy of Egypt, 1774, Oil on copper 80 x 65 cm
Inscribed lower right hand side: ‘Fue tocada a Nra. S.ra de Guadalupe de Mexico en 20 de Abril de 1774 por el Abad de la Colegiata Dr. Dn. Diego Sanchez Pareja.’ Signed lower right on the step: Joans Patris Morlete Ruiz Pingt. This elaborate and impressive copper by Morlete Y Ruiz depicts the rise of Joseph to the role of Viceroy of Egypt following his revelation of Pharoah’s dream represented by the bales of wheat. Its didactic nature was very much a theme of religious painting in 18th century Mexico. As the inscription relates, this particular example was commissioned by the abbot of Santa Maria de Guadalupe, the most important shrine in the Americas, Dr Diego Sanchez Pareja. The various elements of Joseph’s life incorporated into the painting could well be a reference to Dr Pereja’s own career, rising to a position of power within the church at a time when its influence in the secular world was also notable. Indeed the central figure in clerical garb is most probably his portrait. Along with the Trinity and the Virgin, the inclusion of a ship may have had a very personal meaning. In 1766 Dr Pareja was aboard a trading ship called the El Nuevo Constante which was sailing from Veracruz in Mexico to Cadiz. Unfortunately the ship foundered in shallow water off the coast of Louisiana and had to be abandoned, the crew and passengers were all rescued and indeed the majority of the cargo was also saved. The wreck itself was rediscovered in 1979 and an archaeological survey undertaken, its importance being in the fact the original cargo manifests survive. It would seem perfectly reasonably for Dr Pareja, on his return from Spain, to commemorate his own good fortune in a devotional work commissioned for his collegiate church.     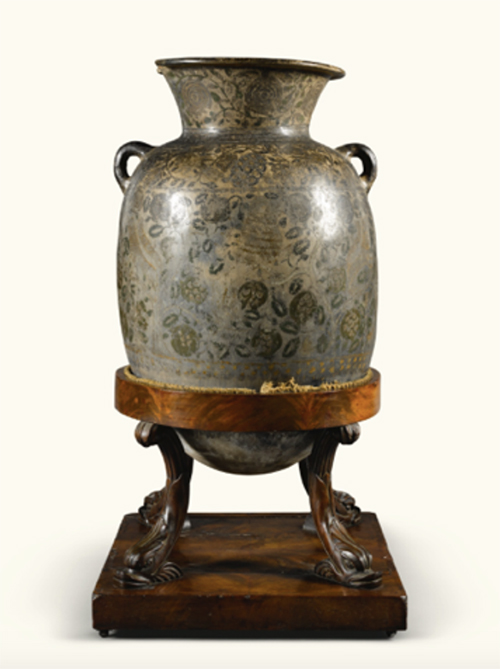 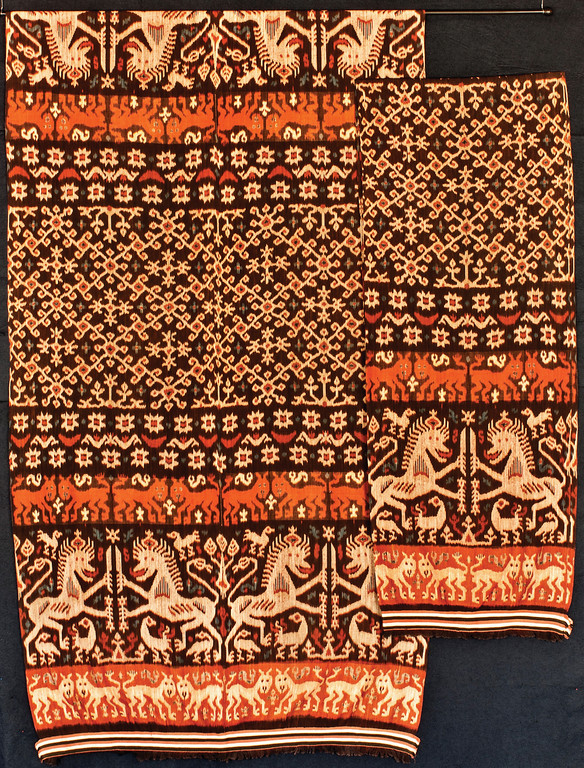 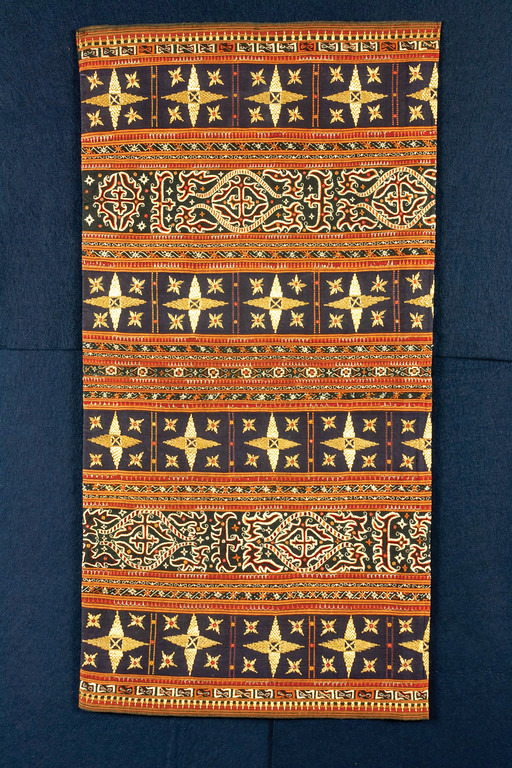 TAPIS Origin: Lampung, South Sumatra, Indonesia These intricate, elaborate skirts are hand dyed and hand woven by women to wear during important ceremonies. First woven and sewn into a large rectangle, the sides were then joined to create a tube for the woman to step into and wear as a sarong. Due to Lampung’s position along major maritime routes and their own production of desirable trade goods, such as pepper and gold, the women of Lampung had ready access to a variety of iconography from other cultures and a wide range of trade materials. This wealth is on display here with the imaginative use of silk, cotton, mica and gold. The skills necessary to create these tapis gradually diminished during the early part of the twentieth century and were extinguished completely during World War

Dancing Threads
Dancing Threads
This extremely rare 19th century double-red ship textile is from Lampung, in south Sumatra and will be part of the exhibit. This area produced the spectacular so-called “ship cloths”, arguably the most famous textiles to come out of Indonesia. Ship cloths were thought to ease the transition from one stage of life to another. The long ship cloths, called palepai, were made and used only by the aristocracy. These were used as ceremonial banners to mark the position of the most important people in the ceremony. Strict sanctions prevented any but the aristocracy from making, possessing, or using palepai.

Afshar, Southwest Persia, Late 19th C., 4’0″ X 5’6″
During the 19th century, the central medallion format, complete with complimentary corner pieces, was generally a design of large, formal workshop carpets. The nomadic weaver of this Afshar rug was inspired by the classic layout, but transformed it with her native, vibrantly colorful aesthetic. She dispensed with the classical formality, and instead focused on the purity of naturally derived color and added charmingly drawn animals to roam the indigo field. This rug exemplifies the true spirit of Afshar weaving.

THIS BLOG IS ALWAYS AD-FREE I make stuff and do things.
View all posts by Stan Flouride →
This entry was posted in Art, Beauty, San Francisco and tagged Art, Culture, design, History, San Francisco. Bookmark the permalink.