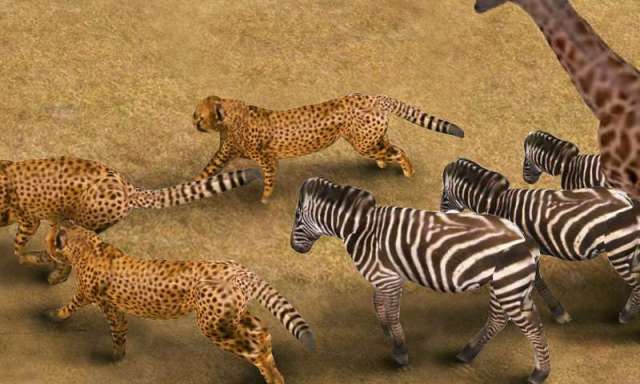 Researchers at the Max Planck Institute for Informatics in Saarbrücken have developed software that even non-specialists can use to create such 3D figures in just a few minutes – to do this, they need nothing more than a video that shows the animal moving. Users only need to indicate the lines of the head, body and limbs, the software does everything else. The program could be of interest to the film and computer game industry but also to non-specialists, who can use it to easily produce animated animal films.

To do this, the researchers developed a user interface that resembles a simple paint program. Using this program, a few mouse clicks are all that are needed to paint the leopard’s tail with an orange line and highlight the spine, head, front and back legs with additional coloured lines. The software transfers these markings to all the frames in the video sequence so that the lines are always on the limbs, even if their position changes in the following frames. The user checks that the program has captured the limbs correctly by controlling the five frames and, if necessary, correcting them manually.

A leopard sprints through a savannah grassland. The video sequence that shows the animal doing this lasts only a few seconds. But it is enough to calculate a three-dimensional, digital, moving image of the animal.

This will be great for game and other immersive VR systems, they can doctor the image to create entirely new species, like this cheebra and zeetah:

In the last step, the leopard’s coat is copied from the image on which the limbs and skeleton were marked and is then dragged over the 3D lattice model as the “texture” – and the three-dimensional leopard model is now complete.

In this way, users receive a good 3D model in just a few minutes that can be used directly for animations or a 3D print. “You can refine the model even further if you need an even higher quality”, explains Tobias Ritschel, Senior Lecturer at University College London. However, the unedited 3D model is already so good that it could be sent to a 3D printer straightaway in order to print a corresponding sculpture on the basis of the digital model.