Posted on September 7, 2016 by Stan Flouride

Dr. Krister Smith of the Department for Messel Research at the Senckenberg Research Institute in Frankfurt, BD  “We discovered a fossilized lizard inside the snake, which in turn contained a fossilized beetle in its innards!” 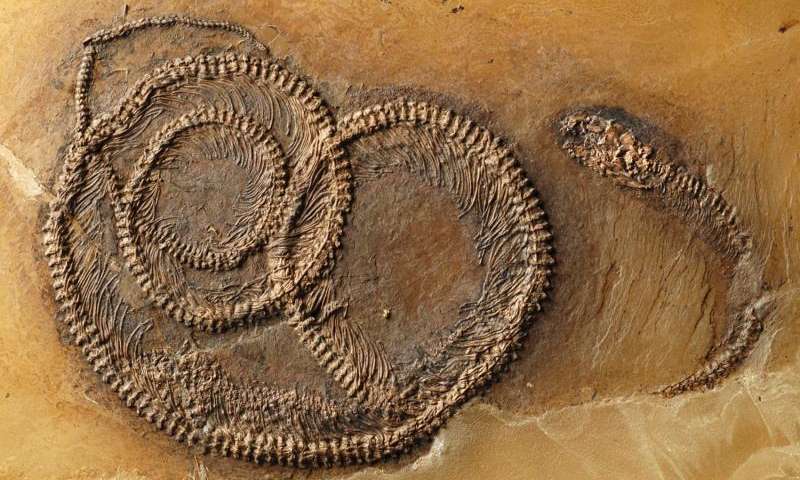 “Until now, we had never found a tripartite food chain – this is a first for Messel!” exclaims Smith elatedly.

To this day, only one other example of such fossil preservation has been found worldwide – in a 280-million-year-old shark:

Using a high-resolution computer tomograph, Smith and his colleague Agustín Scanferla from Argentina were able to identify both the snake and the lizard to the species level. 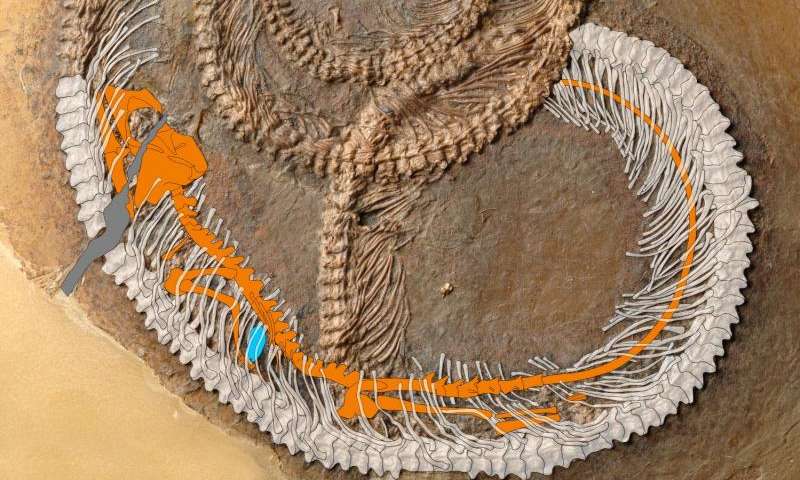 The snake measures 103 cm (41″) in length and is thus significantly smaller than other specimens of this species, which can reach two meters or more. Smith therefore assumes that the fossil represents a juvenile of this relative of the modern-day boas.

The lizard measures approximately 20 cm (8.5″) from the head to the tip of its tail – and some of the snake’s ribs, which overlap the arboreal reptile, clearly indicate that the lizard is located inside the snake. Geiseltaliellus maarius was presumably equipped with a small sagittal crest. It had the ability to shed its tail in case of danger, but did not lose it when it fell prey to the snake. “Unfortunately, we were unable to unambiguously identify the beetle – it was not well enough preserved to do so,” adds the Messel researcher from Frankfurt.

Nonetheless, the small crawler offers insights into the previously barely known feeding behavior of these lizards from Messel: The stomachs of previously discovered reptiles only contained the remains of plants; the fact that the lizards also fed on insects indicates an omnivorous diet.