Why Do Turtles Have Shells? – The Atlantic

Travel back in time to 260 million years ago, just before the dawn of the dinosaur era. Journey to what is now South Africa, and make your way to a river bank.

Eunotosaurus burrows while a herd of Bradysaurus marches in the background

Then, wait. If you’re lucky, you might see a small, hand-sized creature poking its head out of the mud. It looks like a fat lizard, with bulging flanks and stocky legs. But if you managed to grab it and flip it over, you’d find that its flanks are bulging because its ribs are exceptionally wide, broad, and flat, reinforcing its undersides. It’s almost like the little creature has half a shell.

This is Eunotosaurus, and despite its lizard-like appearance, it’s actually one of the earliest known turtles. 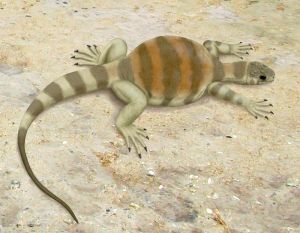 It was discovered in 1892 and ignored for almost a century. But by studying the many fossils of this enigmatic reptile, Tyler Lyson from the Denver Museum of Nature and Science has devised a fascinating new idea about turtle origins.

He thinks that their iconic shells evolved not for defense, but for digging. They anchored the powerful arm strokes needed to shift soil and sand. Before turtles became impregnable walking fortresses, they were professional burrowers.

For almost a century, biologists argued about how turtles got their shells—a debate almost as slow and plodding as the creatures themselves. Paleontologists mostly argued that the shells evolved from bony scales called osteoderms, which are also responsible for the armor of crocodiles, armadillos, and many dinosaurs. These scales simply expanded to fuse with the ribs and backbone, creating a solid covering. But developmental biologists disagreed. By studying modern turtle embryos, they deduced that the shell evolved from ribs, which broadened out and eventually united.

It didn’t help that for the longest time, the oldest known turtle was a creature called Proganochelys, which already had a fully developed (and very spiky) shell,

meaning it couldn’t tell us anything about how that structure first arose.

Everything changed in 2008, when Chinese researchers discovered a 220-million-year-old turtle with a shell that covered just its belly and not its back. They called it Odontochelys semitestacea—literally, the “toothed turtle in a half-shell.”

It was as beautiful an intermediate fossil as they could have hoped for. And strikingly, it had no osteoderms at all. It did, however, have very broad ribs. The developmental biologists were right!

Once paleontologists knew what one intermediate turtle might look like, they found new ones like Pappochelys. They also added existing fossils like Eunotosaurus to the family; ironically, it had been previously ruled out as an early turtle because it lacked osteoderms. With these fossils, scientists could reconstruct the evolution of the shell:

Read those steps here: Why Do Turtles Have Shells? – The Atlantic

THIS BLOG IS ALWAYS AD-FREE I make stuff and do things.
View all posts by Stan Flouride →
This entry was posted in Uncategorized and tagged Biology, Earth Science, Evolution. Bookmark the permalink.