Tritylodontids are the last known family of near-mammalian reptiles, before mammals with features such as advanced hearing evolved. Researchers have uncovered dozens of fossilized teeth in Kuwajima, Japan and identified this as a new species of tritylodontid. This suggests that tritylodontids co-existed with some of the earliest mammal species for millions of years. Credit: Seishi Yamamoto/Hiroshige Matsuoka 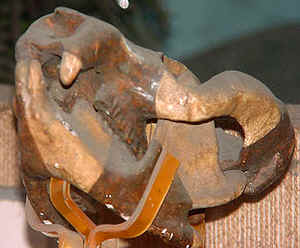 The tritylodont’s skull had a high flat crest and huge zygomatic arches (at the rear of the skull) for the attachment of very large jaw muscles. As in mammals, there was a well-developed secondary palate. The dentition of these animals was quite peculiar, and very different from that of other cynodonts. They had no canines, and the front pair of incisors were greatly enlarged, like those of a gnawing mammal like a rodent. 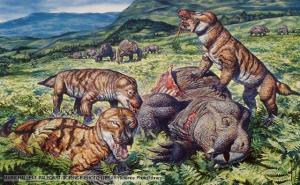 A group of Cynodonts, the missing links between reptiles and mammals, eating a dicynodont therapsid. The early Triassic period. It was one of the more mammal-like of the mammal-like reptiles, a member of a grouping called Eucynodontia. Triassiac age of Africa.

Cynodonts are said to be the missing links between reptiles and mammals. All of the latter are, techincally speaking, cynodonts themselves. It was during the evolution of the cynodonts that many things typical of mammals arose: their jaw structure, the hammer, anvil and stirrup bones of their inner ear, and – the secret of their success – their efficient chewing teeth. Things which don’t fossilize so easily, such as warm-bloodedness, furry bodies and milk production also probably arose in the pre-mammalian cynodonts. They were most likely to have been nocturnal, as the areas of the brain associated with smell and hearing – useful senses in the dark – were enlarged. Eventually synapsid reptiles evolved into primitive mammals:

THIS BLOG IS ALWAYS AD-FREE I make stuff and do things.
View all posts by Stan Flouride →
This entry was posted in Uncategorized and tagged Biology, Earth Science, Science. Bookmark the permalink.