Archaeologists in Turkey have unearthed a mosaic depicting a happy skeleton including the uplifting and wise words: ‘Be cheerful, live your life’.

The unusual 2,400 year-old mosaic was found during excavations on the Syrian border province of Hatay.

This was the site of the ancient Greek-Roman city of Antioch, which now boasts Turkey’s largest collection of ancient mosaics.

The striking skeleton mosaic, is, like many, composed of tiny meticulously pieces of stone, with a striking black background that makes the image look foreboding, before viewers read the Greek text.

The result may arguably be akin to a modern motivational poster.

There are three scenes on glass mosaics made of black tiles:

Two things are very important among the elite class in the Roman period in terms of social activities: The first is the bath and the second is dinner. In the first scene, a black person throws fire. That symbolizes the bath.

In the middle scene, there is a sundial and a young clothed man running towards it with a bare-headed butler behind. 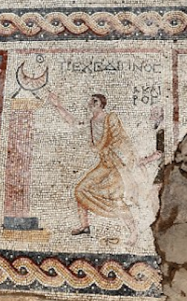 The sundial is between 9 p.m. and 10 p.m. 9 p.m. is the bath time in the Roman period. He has to arrive at supper at 10 p.m. Unless he can, it is not well received. There is writing on the scene that reads he is late for supper and writing about time on the other.

In the last scene, there is a reckless skeleton with a drinking pot in his hand along with bread and a wine pot.

The writing on it reads ‘Be Cheerful and Live Your Life,’” Chief Archeologist Demet Kara explained.