For almost anyone who watched the iconic “Xena: Warrior Princess” during its late-’90s-era run, the idea that Xena and her young comrade Gabrielle were more than buddies registers mostly as a big fat “no kidding.”

But while the original series got by for years on its sly — and much-loved — subtext, a new reboot leaves no room for doubt.

We had to go two decades into the future from where we started, but we’ve finally got a mythological ancient world with gay people. 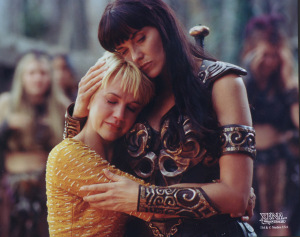 In an interview with Lesbian News in 2003, Lucy Lawless said of Xena’s relationship with Gabrielle, “It wasn’t just that Xena was bisexual and kinda like her gal pal and they kind of fooled around sometimes, it was “Nope, they’re married, man.”

And speaking with After Ellen eight years ago, actress Renee O’Connor, who played Gabrielle, said that “It was very clear that we were together. They are so in love with each other, they love each other so dearly; there’s no way you can say that’s not true. Anyone can see that from watching the show.”

THIS BLOG IS ALWAYS AD-FREE I make stuff and do things.
View all posts by Stan Flouride →
This entry was posted in Uncategorized and tagged Culture, Equality, Mythology. Bookmark the permalink.