British academics have used geographic profiling in a study which backs up a theory about the identity of mysterious street artist Banksy, they said Friday.

Scientists at Queen Mary University of London said the pattern of how Banksy’s artworks are distributed suggests he is artist Robin Gunningham, in a study published in the Journal of Spatial Science. Gunningham was first named as Banksy by the Daily Mail newspaper in 2008.

Banksy’s often politically-themed street art has made him a celebrity in Britain, despite his true identity never having been confirmed.

His most high-profile recent project was Dismaland, which last year mocked the conventions of amusement parks and was located in southwest England. 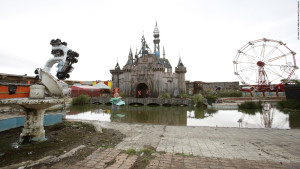 Geographic profiling is a technique used in fields from criminology to studying patterns of infectious disease.

The study analyzed a series of locations of Banksy’s artworks in London and Bristol and mapped them against “anchor points” such as the homes of people suspected of being Banksy to draw conclusions about possible identity. “Our analysis highlights areas associated with one prominent candidate (e.g. his home), supporting his identification as Banksy,” the paper said. “More broadly, these results support previous suggestions that analysis of minor terrorism-related acts (e.g. graffiti) could be used to help locate terrorist bases before more serious incidents occur, and provides a fascinating example of the application of the model to a complex, real-world problem.”

One of the research team, Steve Le Comber, told the BBC: “I’d be surprised if it’s not Gunningham, even without our analysis, but it’s interesting that the analysis offers additional support for it.”

The BBC also reported that Banksy’s legal team had contacted staff at the university with concerns about how the research was to be promoted.