First Signs of Life on Mars?

A picture snapped by Spirit near Home Plate shows silica formations poking out of the soil, which may have been formed by microbial life. (NASA/JPL-Caltech) 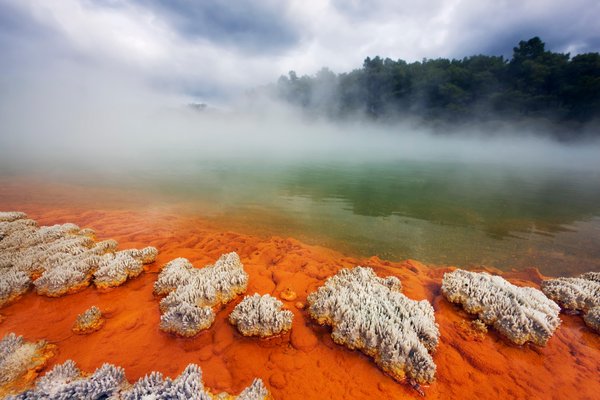 To understand Home Plate, it makes sense to turn to El Tatio, a region in the Atacama that is home to more than 80 geysers. While most other earthly animals wouldn’t last long here, many microbes do just fine, and fossil evidence suggests they also thrived in the distant past. By inference, Mars’s Home Plate might have once made a nice microbial home.

But the comparison goes further: When Ruff peered closely at El Tatio’s silica formations, he saw shapes remarkably similar to those that Spirit had seen on Mars. Fraternal cauliflower twins also exist in Yellowstone National Park in Wyoming and the Taupo Volcanic Zone in New Zealand. In both of those places, the silica bears the fossilized fingerprints of microbial life.

Since microbes sculpted the silica features in Wyoming and New Zealand, it’s possible they also helped make the formations at El Tatio. And if microbes were involved with the cauliflower at El Tatio, maybe they made it grow on Mars, too.

But making a logical leap from one region on Earth to another—from New Zealand to Chile, for example—isn’t trivial or always correct. And it’s even more tenuous to then hop to a whole other planet where, so far, scientists have seen no signs of life. After all, history doesn’t favor life-friendly interpretations of data from Mars.

“Having worked on modern hot springs, I have seen all forms of structures that look biological but are not,” Kurt Konhauser of the University of Alberta says. Silica can come from non-biological processes and water, geography, wind or other environmental factors can then shape it into complex structures. “Because it looks biological doesn’t mean it is,” he says.
Read more: http://www.smithsonianmag.com/science-nature/mysterious-martian-cauliflower-may-be-latest-hint-alien-life-180957981/#OO8zcLEFyLU5MXpp.99