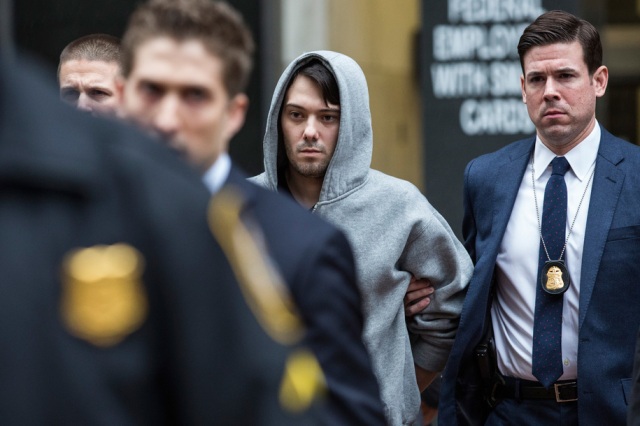 Unfortunately is had nothing to do with his disgusting drug price greed but it’s still a pretty picture.

The 32-year-old biotech CEO, who sparked outrage by jacking up the prices on life-saving drugs, was arrested Thursday on securities fraud charges. But the stock market is about to deliver the ultimate justice – a massive decline in the value of his stock to the tune of $27 million.

Shares of KaloBios, which trade on the Nasdaq by the symbol KBIO, lost half their value to $11.03 a share just before being halted, according to trading data from TD Ameritrade. That’s a massive blow to Shkreli, who owns more than 2 million shares, or about half of the company, says S&P Capital IQ. If shares reopen at the price they were trading prior to the halt, Shkreli is looking at a $26.1 million loss on just that investment. Shkreli actually was buying additional shares of the company in the weeks leading up to his arrest.

But that’s not all. Shkreli also owns 1.8 million shares of Retrophin (RTRX), the publicly traded biotech which is at the center of the allegations of fraud. Shares are down 2% – adding another $723,719 in losses. Shkreli had been CEO and president of Retrophin starting in 2012 through 2014.