A NASA camera aboard the Deep Space Climate Observatory (DSCOVR) satellite captured a unique view of the moon as it moved in front of the sunlit side of Earth last month. 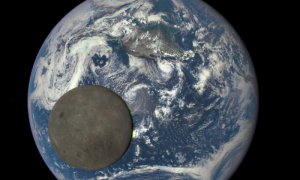 The series of test images shows the fully illuminated “dark side” of the moon that is never visible from Earth.

The images were acquired by NASA’s Earth Polychromatic Imaging Camera (EPIC), a four megapixel CCD and telescope on the DSCOVR satellite, which orbits about 1.6 million kilometers (1 million miles) from Earth. EPIC maintains a constant view of the fully illuminated Earth as it rotates, providing daily scientific observations of ozone, vegetation, cloud height, and airborne aerosols. About twice a year the camera will capture the Moon and Earth together as the orbit of DSCOVR crosses the orbital plane of the Moon.

The images shown above and in the movie below were taken over the course of five hours on July 16, 2015. The North Pole is toward the upper left, reflecting the orbital tilt of Earth from the vantage point of the spacecraft.