News and photo via Hoodline
Bob Smith, the Robert in Roberts Hardware [family lore is that his immigrant German father didn’t know or understand English possessive grammar and hence there is no apostrophe] ran the family-owned Haight Street hardware store from 1960 until 1993. 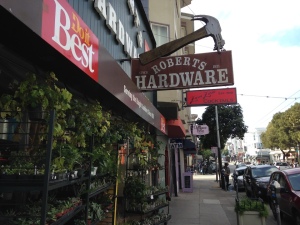 During the 1960s he added things like flickering light boxes, strobe lights, Day-Glo paints, black lights, and Lava Lamps to serve the burgeoning new psychedelic market in the Haight. In those days you could see all the way to the back of the store across the 5′ shelves.
He hired local kids, mostly African American boys and gave them make-work tasks such as sweeping and the like. Those that worked he encouraged with more jobs and those who slacked off he let go, but only after explaining to them exactly why. Many of these now adult men, few who still live in the neighborhood, still stop by and ask after him. It will be sad to tell them the news.

In the early 1970s Bob weathered the neighborhood’s darkest days when the ‘hood was overrun with hard drugs and the accompanying crime. In the late 70s and early 80s the Haight was gradually coming back from those depths, largely due to many young gay men who saw these closed businesses as opportunities and opened boutiques, galleries, and cafés. The thriving business district we have today owes its rebirth to those men, many of whom were already infected with HIV and wouldn’t make it to the millennium.

He had long sold the house in the neighborhood and moved to the suburbs but kept the store alive to pass it to his sons Steve and Bruce who took over in 1993.
Both of them (and their sister) went to college but the boys discovered that they were much happier working in the hands-on environment they’d grown up with than working in an office.

They both became General Contractors and built the business that I have loved working for the last 17 years.
(The first week I worked there I came in and found my boss Steve mopping the bathroom floor. I knew then that I had found a place that I would like working)