Granted that the verbal diarrhea that comes out of Donald Trump’s mouth is no real surprise to anyone who has paid any attention at all to his history, the recent remarks about Mexico have delightfully come back to bite him in the ass, losing him Macy’s, Mexican TV’s Instavision, and NBC. And of course the people of Mexico have responded in their usual creative fashion with these designs for piñatas.

While not as satisfying as actually beating Donald Trump with a stick until candy (or really anything of value) came out, these designs by Dalton Ramirez would still be fun. 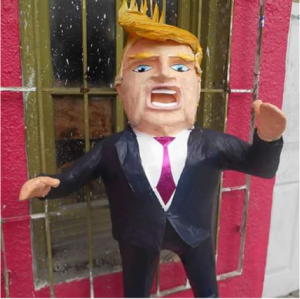