Though today it has my rendering of Frida Kahlo (in acrylic clear gloss medium), in 1980 this jacket was the recipient of what I am certain was the first piece of clothing with a design by Keith Haring.

I was in NYC that year and had seen Haring’s work in chalk on the black paper that was used to cover ad spaces in between their use for advertising:

An act for which he was arrested several times, here in 1983 by a member of NYC’s most dangerous gang of thugs: 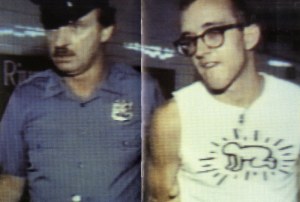 (How DARE he deface the beautiful subway!) 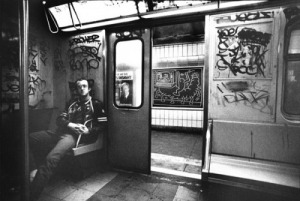 Very late one night (well after 3 a.m) on the subway on my way uptown I spotted him working on a platform. I jumped off, even though it was a few stops ahead of my stop, and asked him to draw a picture on my jacket. So he drew a picture of himself drawing a picture on my back on the back of the jacket (which did not yet have the Frida image).

It was chalk and only lasted a few days but for that brief moment I had a landmark piece of art on my back.
Can you imagine if I’d only had the foresight to spray it with urethane?

1 Response to The FIRST Keith Haring article of clothing